Tzu Chi Foundation wrapped up its third and final relief distribution for Antipolo scavengers last December 4 at the Pantay Elementary School in Antipolo, Rizal. Doris Moaña was among the 220 scavengers on hand to claim her third set of two 10-kg sacks of rice and bags of assorted groceries.

The 52-year-old believes she was part of Tzu Chi’s relief efforts for a reason. “We were chosen to help others,” she says.

Thus, a majority of her accumulated 60 kilos of rice went to a neighbor as well as one of her grown married children. She also turned over the spare change she collected in her Tzu Chi coin bank and intends to continue the habit of saving. “Whatever you receive, share it with others, even if it’s one or five pesos,” she says. “It may be a small amount but it’s able to help other people like me.”

In her three months as a Tzu Chi beneficiary, Moaña even managed to start a business in the ongoing pandemic. With more than enough rice to feed her family, she used her extra money to invest in a small store where she sells coffee, balut (fertilized duck egg), and lugaw (porridge). “I wouldn’t be able to do this if Tzu Chi didn’t give me rice,” she says. “All the money I make would just go to buying rice every day, so thank you very much.”

Scavenger Domingo Condes is just as appreciative over what he received. “You gave us an early Christmas,” he says of the generous supply of rice and groceries.

The 43-year-old made it to the early-morning event despite coming home at 2 am from scavenging. “I wasn’t sleepy!” says Condes who was all ears during the program that precedes the distribution. “It was like being in church. Tzu Chi’s teachings are the same as the Catholic’s.”

While Tzu Chi distribution events run like clockwork, they take months of planning, preparation, and support from the local government. “Tzu Chi Foundation has been helping Rizal Province since the time of Super Typhoon Ondoy,” says Antipolo Mayor Andrea Ynares. “And they continue to do so without asking for anything in return. In the City of Antipolo, they have helped thousands of residents, especially when the pandemic first struck. With that, I am deeply grateful to Tzu Chi.”

Tireless and dedicated volunteers also ensure the success of Tzu Chi distributions. Volunteer Siony de Guzman remembers contacting beneficiaries one by one, going to their far-flung homes to meet them personally, waking up at ungodly hours to arrive at the distribution site well before the event, and being pecked by pigeons as she was setting up the covered court.

She also recalls their first attempt at going to Pantay Elementary School. The jeep they were riding took a wrong turn, she recounts, and if they had continued on, would have ended up in Quezon Province!

“It was like an excursion,” says De Guzman good-naturedly of her experience, “but one where we were able to help people. I’m glad I was able to be part of this. I wouldn’t be able to help others if I just stayed home.”

To Tzu Chi beneficiaries, she says, “I hope they remember and keep applying the teachings of Master Cheng Yen in their lives. The rice and groceries they received won’t last forever, but the lessons from Tzu Chi they can keep and carry for the rest of their lives.” 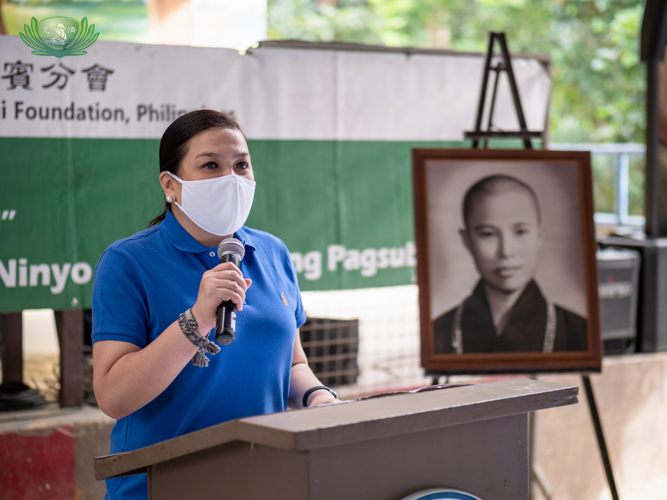 With a photo of Dharma Master Cheng Yen in the background, Antipolo Mayor Andrea Ynares addresses the audience of scavenger beneficiaries at the Tzu Chi distribution. 【Photo by Daniel Lazar】 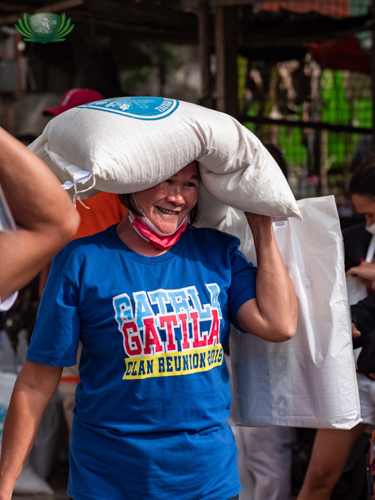 A scavenger beneficiary is all smiles as she leaves Pantay Elementary School with her rice and grocery relief goods. 【Photo by Daniel Lazar】 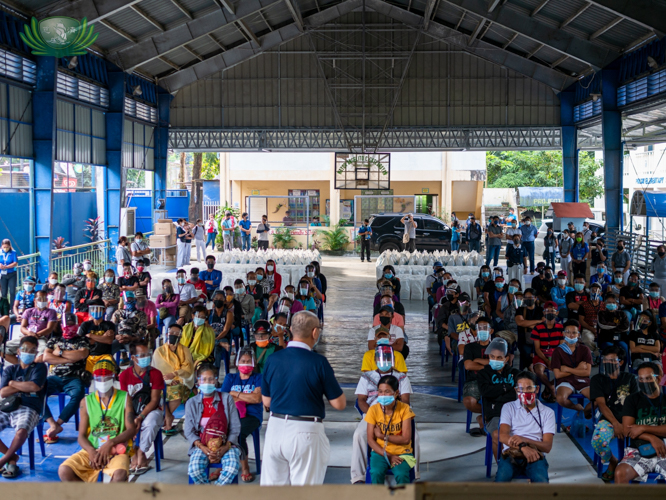 220 scavengers showed up at the covered court of Pantay Elementary School to attend the Tzu Chi program then claim their third tranche of rice and assorted grocery items. 【Photo by Daniel Lazar】 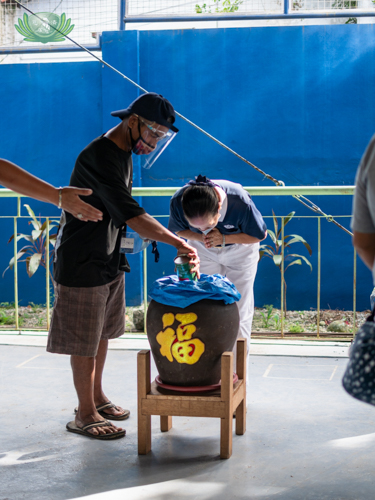 A volunteer bows in gratitude as a scavenger beneficiary drops his collected coins in a jar. 【Photo by Daniel Lazar】 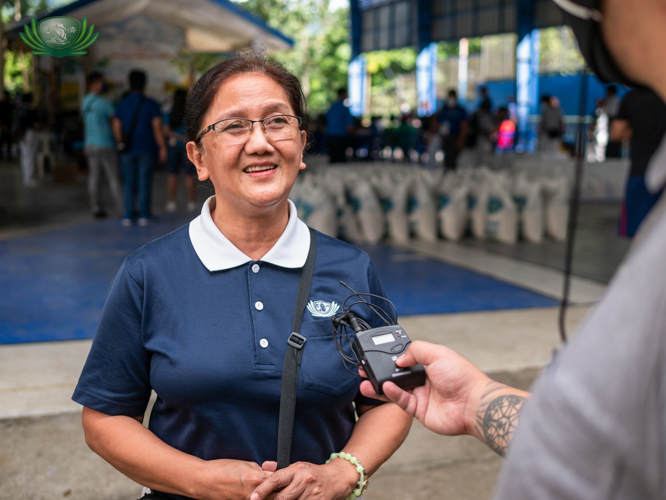 Volunteer Siony de Guzman hopes that Tzu Chi beneficiaries remember and apply the teachings of Master Cheng Yen in their lives. “The rice and groceries won’t last forever, but the lessons from Tzu Chi they can keep and carry for the rest of their lives.” 【Photo by Daniel Lazar】 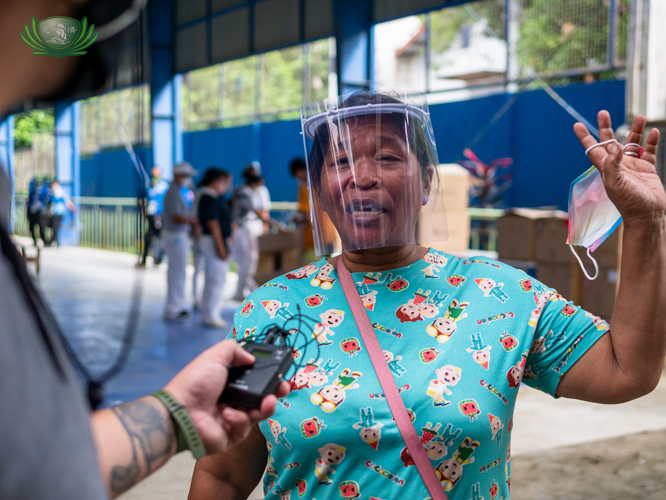 In the ongoing pandemic, scavenger Doris Moaña was able to open a small store with money that was intended for rice. She also shared a significant amount of her rice relief with a neighbor and her grown married child. “Whatever you receive, share it with others,” she says. 【Photo by Daniel Lazar】 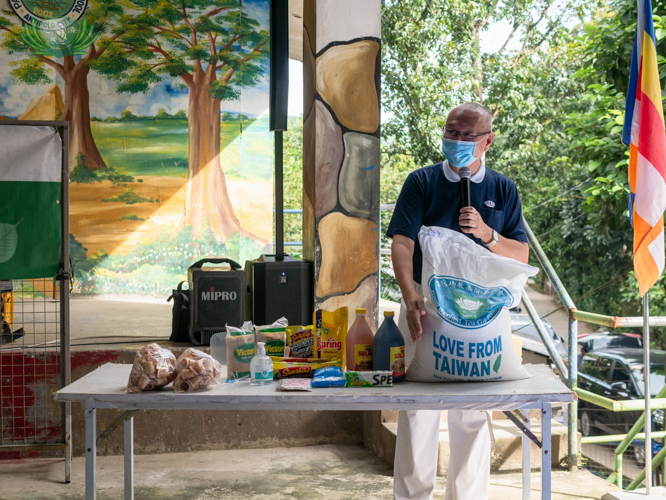 A volunteer shows beneficiaries the goods that each of them will receive—from Taiwan rice to cooking oil, vinegar, soy sauce, sugar, noodles, and bath and laundry soaps. 【Photo by Daniel Lazar】 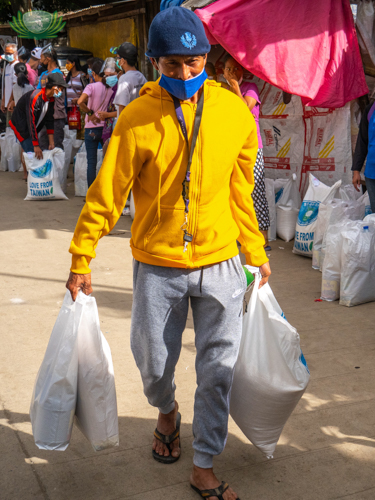 Despite scavenging till 2 in the morning, Domingo Condes made it in time for the early-morning distribution event. 【Photo by Daniel Lazar】 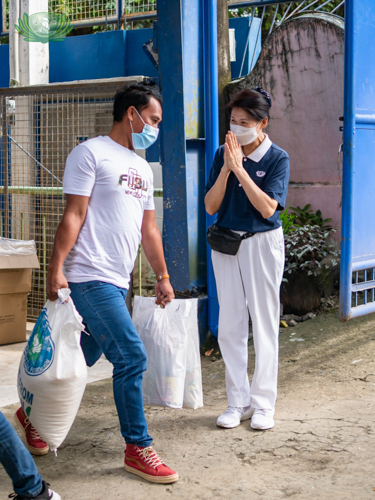 A volunteer wishes each beneficiary well as they exit the distribution site. 【Photo by Daniel Lazar】

When she isn't scavenging, Doris Moaña runs a small store. With all the rice given to her by Tzu Chi, she used her money intended for rice to fill up her store with soda, duck egg, and porridge. 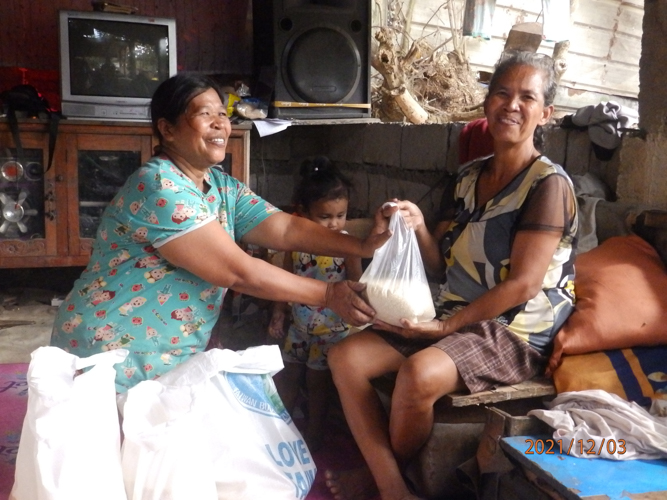 "Whatever you have, share it with others," says Doris Moaña (left), who divided the rice she received from Tzu Chi and shared it with a neighbor.
Go Back