The procedure benefited both Renato Santos and Dr. Kent Tan.

Watching Renato Santos rise from his seat at the Jing Si Auditorium of the Buddhist Tzu Chi Campus in Sta. Mesa, Manila, and make his way to the podium to give a testimony on the life-saving procedure facilitated by Tzu Chi, it’s hard to believe that the 48-year-old couldn’t stand up without catching his breath just a few months back.

A guest speaker at Tzu Chi’s Charity Day on March 27, a morning event for individuals receiving long-term medical assistance and other benefits, Santos gave an emotional account of how he suffered from severe chest pains and a heart attack in September 2021—the result of his heart’s major artery blocked by nearly 100 percent.  He needed an angioplasty, a minimally invasive procedure that would unblock his artery. But at hundreds and thousands of pesos, it was too costly.

Then a friend suggested he approach the Tzu Chi Foundation. What followed next was beyond his wildest dreams. After his request for angioplasty was reviewed and approved, he underwent the procedure on November 2021 at the Chinese General Hospital at no cost on his part. Lying on the operating table, Santos wept with his eyes closed when the team of doctors burst into applause after the procedure was deemed a success.

Overwhelmed by the compassion and care extended to him by Tzu Chi volunteers, he even received a birthday cake from them when he arrived home. “But it isn’t my birthday,” he said. “It’s for your new life,” they told him.

Besides the new lease on life, Santos gained a friend in Dr. Kent Tan, the interventional cardiologist who performed the angioplasty. Tan, son of Tzu Chi Bicol volunteers Tony and Therese Tan, had recently returned to the Philippines after completing a clinical fellowship in interventional cardiology at the National University Heart Centre in Singapore. Through a meet-and greet with Tzu Chi Philippines CEO Henry Yuñez, he has performed angioplasties for at least three of the foundation’s beneficiaries, beginning with Santos.

“He’s very attentive,” says the patient of his attending physician. “He told me he would look for the right stent for my heart, then personally attended to me when I had difficulty breathing. What doctor would do that?”

In an effort to keep costs minimal, Tan made a list of the items necessary for the procedure. He also waived his professional fee. “As a doctor, I want patients in my care to feel comfortable. I also want to establish their trust and confidence in me. It’s crucial that patients believe they will get well through a good treatment they deserve.”

Month later, it’s clear that the procedure has had a profound impact on both men. Improving by the day, the once breathless Santos can now walk and ride a bike with ease. He also advocates healthy eating and promotes eating vegetables over processed foods.

“For doctors, there is no greater reward than seeing your patient get better,” says a visibly moved Tan of how this experience has affected him. “So, if I helped Mr. Santos physically, Mr. Santos helped me spiritually. Helping is a medicine for the soul. Everyone, regardless of their status in life, has the capacity to help.” 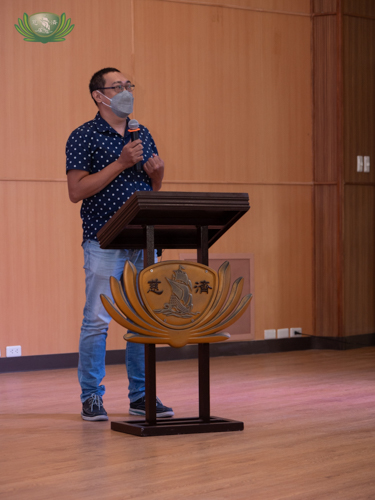 Renato Santos gives an account on how he received a life-saving angioplasty facilitated by the Tzu Chi Foundation. 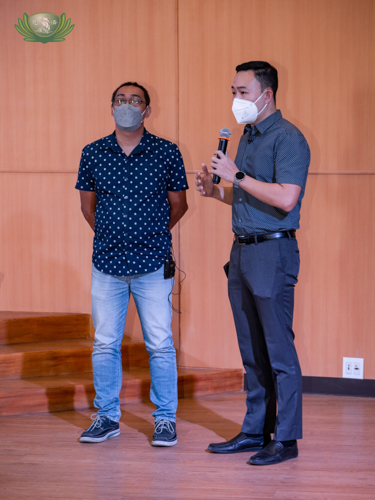 “I only had a small role in Mr. Santos’ recovery,” said Dr. Kent Tan (left), who performed the angioplasty. “Much of the kindness and work came from Tzu Chi volunteers.” 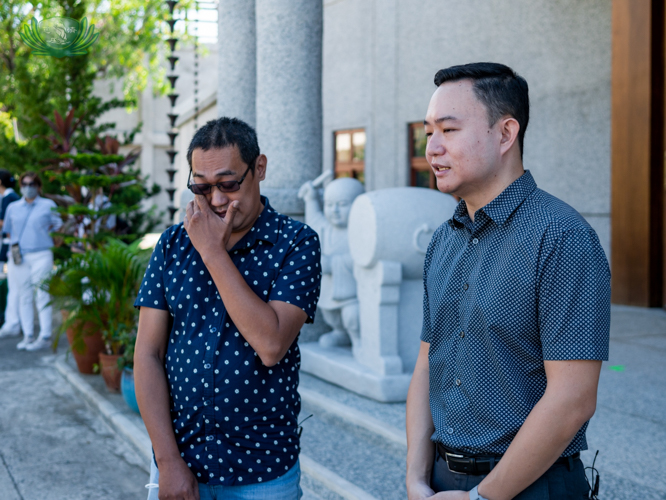 Renato Santos (left) wipes away tears as Dr. Kent Tan explains the impact the angioplasty on him. “If I helped Mr. Santos physically, Mr. Santos helped me spiritually. Helping is a medicine for the soul.” 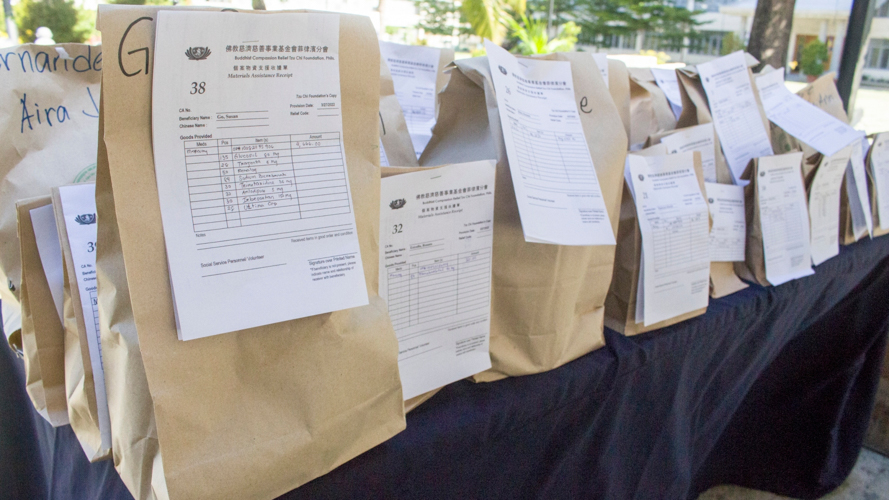 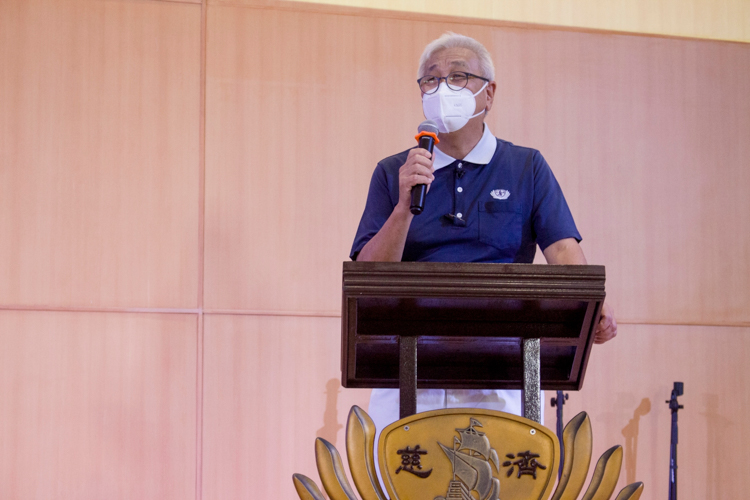 Even during the pandemic and storms, Tzu Chi continued to support you and your needs, says Tzu Chi Philippines CEO Henry Yuñez. 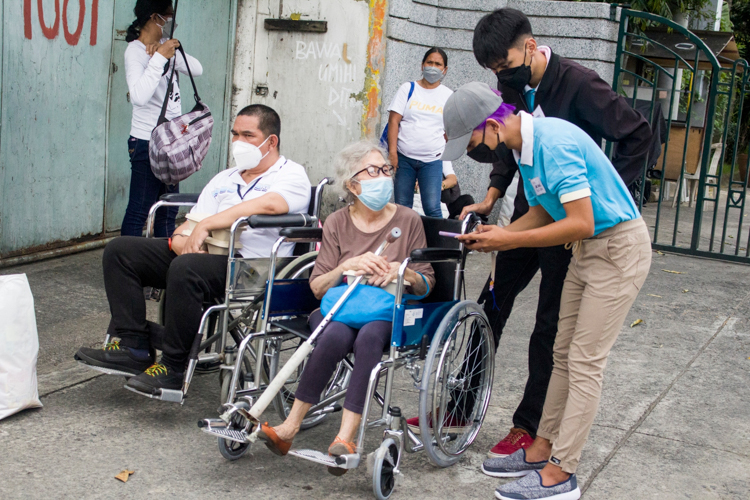 Tzu Chi scholars assist a beneficiary in a wheelchair. 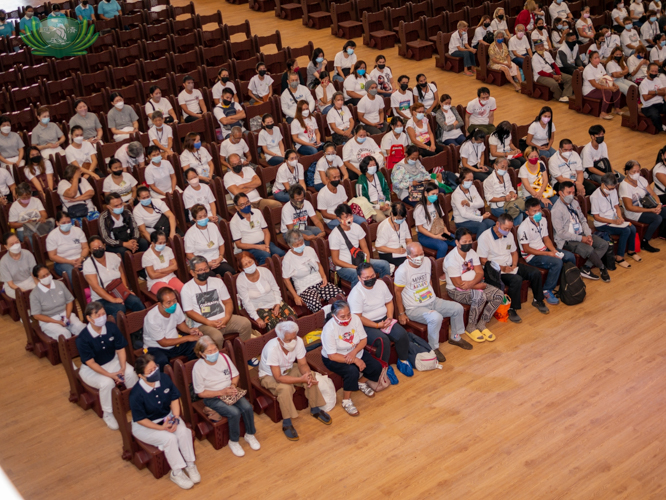